Our life in Urumqi 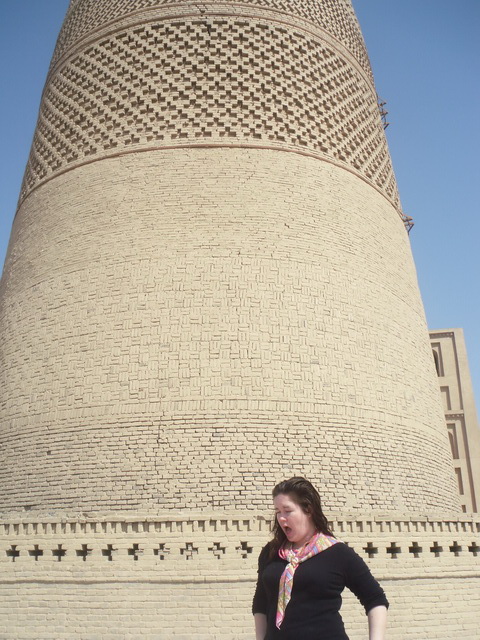 It started, as so many of mine and Ian’s stories do, with a mild hangover, and us getting going much later than planned. Our colleague arrived at our house at about 10am and by 11am we were ready to go and stock up at the nearest supermarket… where I found a massive punnet of strawberries for three quai. That’s 30p! 50 cents! Hell yeah. I may have talked about this enough to have thoroughly annoyed the boys, but whatever. 30p for a punnet of strawberries! A week later, this still makes me happy.

Supplies obtained, we get the city bus to the long distance bus stop. We used the mandated idiots-abroad method of obtaining bus tickets: smiling at the ticket clerk hopefully and linguistically butchering the name of our destination. We were in luck, it took us just 15 minutes from arriving at the station until our bus left, with us on it!

Turpan (or Turfan, or Tulufan) is an oasis city in the Taklamakan desert, and so, through the desert we went. The Taklamakan should be horrifically ugly but is beautiful through sheer impressiveness. Not far south of Urumqi the desert begins; mostly flat, but interrupted occasionally by individual, towering mountains and loads of wind turbines. The view is also interrupted by the occasional clump of camels. Those passengers who hadn’t realised they had tourists on board when they saw our very tall redhead friend, certainly realised it when they heard me squeal ‘camel, camel, camel…. OMG LOOK BABY CAMEL!!!” 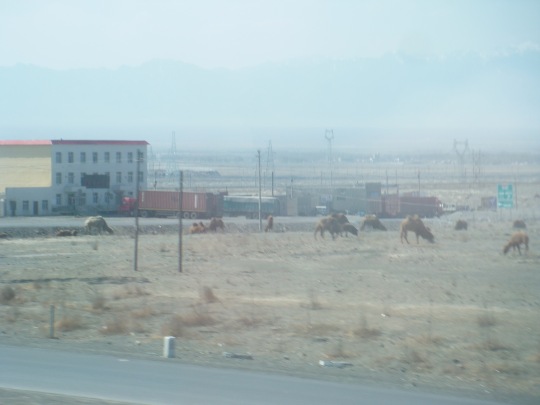 Two hours later we arrive in Turpan, a welcome green oasis. We had looked up a hotel to stay in and promptly began walking in the wrong direction. We were picked up by a man who introduced himself as Ali Baba and taken to his cave… um, hotel. This fulfilled an (apparently) lifelong dream of Ian to meet someone actually called Ali Baba, and the fact that it was almost certainly a BS name didn’t stop it from making his day. 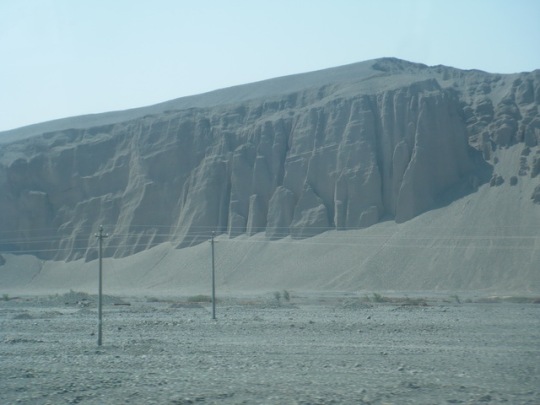 The town is small, friendly and clean. To my delight, it was also HOT. There’s a strangely mediterranean vibe about Turpan; with the heat, sharply dressed and impressively bearded old men; glamorous scarf-clad women strolling around with bling and sparkles during the day; and endless grape vines we thought it was like a quick trip to Sicily or perhaps the Greek Islands (only minus, you know, the bit where they’re islands, obviously). The best bit about day one: I won at cards, I won at cards, I won at cards, I won two bars of fancy imported chocolate off the boys! There goes the diet, yet again.

Day two kicked off with a visit to the local museum. I loved the desert mummies on display, but was not so keen on the fact that the displays appeared to stop in the mid 16th century in favor of plaques subtly emphasising how harmonious all the wee ethnics were, contributing to the harmonious nature of the harmonious nation of China by living harmoniously. Um. Right. 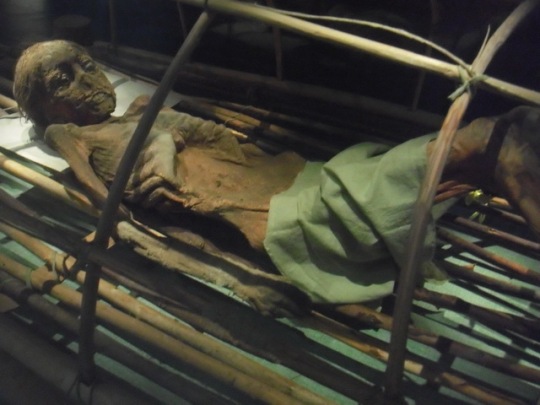 Then came possibly the highlight of my time in Xinjiang so far: a visit to the Emin Minaret. The people living around here know what to do with mud, and I don’t just mean knocking it off their shoes. Look at the pictures, this thing is amazingly beautiful, detailed 20 metres odd tall, hundreds of years old and it’s entirely made of mud and the odd pice of twig. 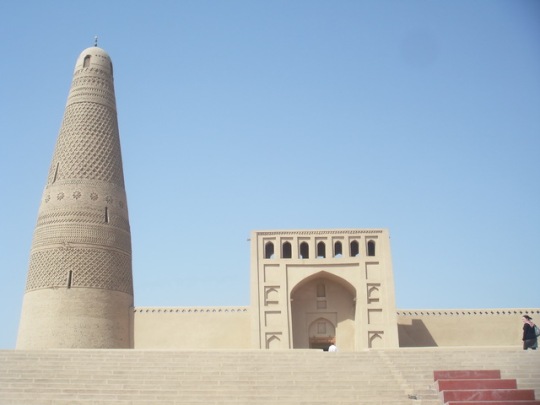 Back on the bus… only interrupted by the bus being stopped and all the passengers taken off by heavily armed police. Checkpoint. All the passengers except us, that is. We had someone come on the bus to speak with us: Police officer: “Do you speak the Chinese?” Us: “No, we don’t, sorry” Police officer: “Passports…. okay, bye”. Everyone else grabbed their bags, shuffled through the processing facility (or, a shed, depending on your perspective…) and then got back on the bus looking resigned/grumpy/safe.

I felt a little bad at the easier treatment, but I’m still aware that the ability to laowai (act foreign) our way through things is one of the biggest blessings we have here. The short version here: if you find yourself in the vicinity of Turpan (remember; Far. North. West. China) do take the trip.

Camels and kebabs – life in Urumqi